Tonto and the Lone Ranger

Gore Verbinski directs what I can only call a morality play, holding up a mirror to our culture that, like the very best fiction, is so true it hurts.  No wonder the box office is disappointing. This particular truth, about the power of capitalism to totally corrupt, is hard for us to face.

The film cleverly employs elements of parody and irony along with the usual action shots, gags, and suspenseful chase scenes to offer the comic relief and adrenalin surges, which make it possible for the audience to keep watching. They work beautifully to offer momentary respite, but the film never lets us stray too far from bitter truths about our destruction of Native American freedom and way of life, our exploitation and degradation of Chinese labor, the on-going deliberate abasement of women and, most of all, our American culture’s insidious never-ending greed for more.

Lone Ranger uses all the elements of a “real” cowboy movie – star-crossed lovers, coming of age, independent good hero set against the bad villains, silver mines, Indians on the warpath, golden-hearted whore – and yet it’s all a little off.  To start with, every white man in the story is corrupt, except for two, and one of them is dead.

Armie Hammer who plays the ranger John Reid is an archetypal Fool endowed with The Fool’s traditional attributes of silliness and wisdom. Beginning his journey of individuation, this wide-eyed innocent stumbles and bumbles along through the movie, guided by Johnny Depp in his role of Tonto.

This is the movie’s first role reversal because it’s actually the ranger who is the sidekick.  Tonto is no Sancho Panza squiring his Don Quixote.  Tonto is the man with a quest.  He is also a powerful shamanic figure able to converse with the spirit world, interpret signs and portents, and see the world without blinders. He wears the aspect of the Sacred Clown, an important figure in several Native American traditions. For instance, among the Lakota the Heyókȟa’s violate taboos, rules, regulations, social norms, or boundaries with complete insouciance.  In so doing, they paradoxically define the accepted boundaries, rules, and societal guidelines for ethical and moral behavior. Only sacred clowns can ask “Why?”  Their pranks serve to penetrate deception, turn over rocks, and create deeper awareness of the complexity of life. 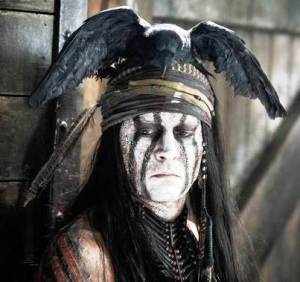 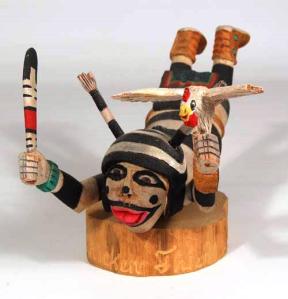 Sacred Clowns of the Pueblo

Sacred Clowns are respected, appreciated and avoided by their people.  Our Tonto is an outcast, unable to function in his own society, he travels the world alone still traumatized by the wound to his soul, which forced his spiritual awakening.  He will have to travel full circle and relive his original trauma in order to move on with his life.

As always, Johnny Depp turns in a brilliant performance.   Once again, he employs heavy stage make-up as a mask to disguise his own physical attributes and facial expressions to allow the character more freedom to emerge.  I love the way his use of masks harks back both to ancient Greece and also the sacred theater common to tribal cultures around the world.

For me, the most interesting thing of all is John Reid’s resistance to using his gun to kill. How often have we seen this scene in run-of-the-mill westerns, where the pacifist idealistic hero is told to man up and shoot the dirty dastard?  In the end, forced by self-defense or the necessity to protect a loved one, he always bows to pressure and kills, allowing us to sit back in our seats and give a sigh of relieved satisfaction that the boy has passed his initiation and become a man at last.  In spite of repeated entreaties to do so, including an eloquent speech by Tonto, John Reid persists in refusing to kill his man.

The bad guys win – of course they do.  Tonto and the ranger run away, to fight another day, but our incorrigible clown takes the last trick.

Using the beloved icon of the cowboy movie to deliver this timely cultural commentary was a dangerous and brilliant thing to do.  Maybe, it was too clever. Perhaps, a more slapstick approach, a less subtle parody would have made us less uncomfortable with this vividly portrayed and very unflattering portrait of ourselves.

As to the critics who complained that Native Americans are treated disrespectfully – obviously they didn’t see the movie.  Crazy outcasts are present in every society.  The film made it clear Tonto did not represent Native Americans as a whole.  The community itself was portrayed with dignity and respect.   In the same vein, Butch Cavendish, the character  Transforming Faces complains about, is a violent person.  It is perfectly natural for a knife fighter to carry scars on his face.  This kind of censorship in the guise of political correctness is exactly the kind of hypocrisy, which the movie addresses.

1 Response to Tonto and the Lone Ranger