First they came for the Jews and I did not speak out because I was not a Jew.

because I was not a Communist.

because I was not a trade unionist.

Then they came for me and there was no one left to speak out for me.

Recently, I received a request from a poetry group I belong to keep the poems “family friendly” at our up-coming meeting. By chance our usual venue was temporarily unavailable and we were kindly being hosted in the community room at a local retirement community. The members were invited, as the public always is, to attend our gathering. The request was made with the intention of not offending our hosts in any way. I’m sure it wasn’t intended to offend the membership.

But I am offended – on several counts. I take affront, on behalf of our hosts; these are sophisticated adults who like Pastor Niemöller (quoted above) have survived sixty to a

hundred years of war, disease, technological advancement, and incredible social change. I find it disrespectful and insulting to assume they need to be protected from the world as if they were children.

I believe free speech is the bedrock upon which civil liberties stand. Censorship is an insidious evil based on the self-righteous arrogant assumption that one person has the right to determine what thoughts, expressions, ideas or feelings another person should read, hear, watch, taste, smell or feel.

Is this beginning to sound like the elements of a poem? Poets have long been associated with freedom of expression. Like jesters, fools, heyoka, tricksters, shamans and magicians, they play a particular role in society. Poets are the ones who speak out, make waves, rock the boat and declare the emperor is parading naked down the street. Cutting across all 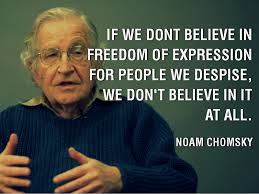 lines of race, creed, gender or class we speak in the voice of all the people. We broadcast in the vernacular and idiom of every language. Often we speak for the dispossessed, the silent ones whose voices have been stolen by fear, starvation, disease or violence.

It’s ironic that our censor used the euphemism “family friendly” to poets who so often come from families anything but friendly; just as it’s ironic that the euphemism for words considered bawdy, irreverent, un-gentil , vulgar or irreverent is “language.” The word “vulgar” first appeared in 14th century England. It comes from the Latin vulgaris of the mob; vulgar from volgus, vulgus mob, common people. The Vulgate Bible adopted by the Catholic Church in the 4th century was called that because it was translated from Greek to Latin, the vulgate tongue – the language of the common people. The Bible is a perfect example of the need for vulgar expression. 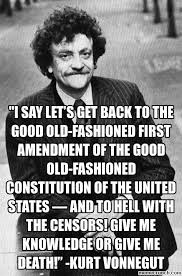 St. Jerome’s Latin translation allowed the common people access to the word of God in their own language. Centuries later when Latin ceased to be a common tongue, the holy words became arcane secrets, closely guarded by a clerical establishment so inbred and unchanging it became corrupt enough to inspire a revolution that resulted in vernacular translations across Europe. “Language” brought about the social change that eventually dismantled feudalism.

My point is that to stay healthy, vibrant and alive a community needs a few truth tellers. It needs a few brave souls willing to turn over the rocks, shine lights into the shadows and witness what they see; to keep us honest about what and who we are, to praise the angels and scorn the devils. Without them the community turns into a closed system doomed by entropy to a slow death. New perceptions, novel concepts, and outré opinions uttered in fresh

configurations of words, phrases, lines, and stanzas turn, aerate and enlighten concretized patterns of thought and behavior. By merely existing, poets act as catalysts for exponential explosions of new ideas in all fields of endeavor from quantum mechanics to ballet recitals for toddlers. Contrariwise, poets are also the lightning rods, the relief valves, the ground wires that bleed off stress.

Listening to someone “speak in tongues,” (another vernacular, an unfamiliar vocabulary, a different accent) can be uncomfortable or disturbing. Especially if it upsets the built-in censors we all carry inside of us – those rules and regulations imposed in childhood. One of my own bug-a-boos is hackneyed sentiment expressed in time-worn phraseology. For others it might be the use of slang or swear words. Experience has taught me that pushing past whatever grates or irritates often rewards me with an unexpected insight that opens my heart and mind to deeper understanding and enhanced compassion. Time and again, I find myself standing humbled amidst the ruins of some shattered prejudice or bias.

This is the gift poets bring. Without us, the world might feel more comfortable, but not for long:

First they came for the Jews and I did not speak out because I was not a Jew.

because I was not a Communist.

because I was not a trade unionist.

Then they came for me and there was no one left to speak out for me.

Happily, I’m in good company. I do not stand alone. It doesn’t mean speaking out ain’t scary, but we must, we must.

1 Response to Speaking Out