When Coyote Shows Up To Play

Posted on February 17, 2017 by Christine Irving

Several months ago I signed up on Owl & Crow for an on-line course in creating a Major Arcana tarot deck of SoulCollage® cards.  It started January 8th, but by then I had forgotten

exactly what I had enrolled in.  I received no notices because they all got sent to Promotions by my server.  Happily, I received a Facebook notification announcing a friend’s new Fool card, checked it out, saw the site, remembered everything and found my lost instructions! 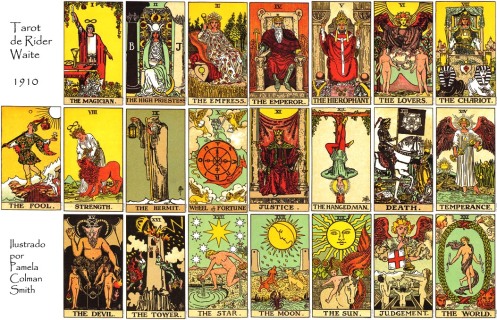 The Major Arcana of the Tarot consists of The Fool and 21 other numbered cards.  The Fool has no value- he/she is the joker, a wild card who fits at either the beginning or end of the sequence and can pop up anywhere.  The Major Arcana cards represent, among many other things, a journey of initiation, like the one we take in life, in which we meet and grapple with all the attributes of being human.  Starting in the beginning place, as fools, we pass through each aspect of ourselves gaining self-knowledge until in the end we become whole.

I opened that post  this morning because the word “Fool” caught my eye.  The Fool and I are old

friends by way of Coyote, a Trickster totem of mine.  The Trickster is one of

the basic archetypes in the human psyche.  He/she could be said to be an archetype of humanity itself – absurd, intelligent, ridiculous, arrogant, innovative, deceitful, vulgar – well you begin to get the picture.  Perhaps the one truly unique thing about human beings is our ability to laugh at ourselves.  This is the Trickster’s forte and the reason he/she is so very important to us.  It was probably Coyote who blurred memory, jumbled files, and mucked about for six weeks before showing up late, in time to tag me!

I recently posted about my new book of Irish poems, Sitting on the Hag Seat, but today, seeing how Trickster is hanging around, it seems like a propitious moment to talk about an earlier collection The Naked Man that’s all about the Fool.

As you can see the cover derives from the Ryder-Waite tarot card pictured above.  The poems describe a man stuck in the Fool archetype.  Fools are meant to journey on and become more wise without losing the qualities of child-like simplicity and delight.  As the Fool roams about the world he/she is meant to linger in other places, see the world through different eyes.  A person run by an archetype, or as Santeria says, “ridden by a god,” loses their volition.  They have yet to learn to see themselves absurd, laugh appreciatively and move on.  The Naked Man attempts to show how painful and funny it is to be stuck.

I honor Coyote’s guidance in this and all my endeavors, the artistry of my daughter Kathleen Irving who drew the Naked Man on the cover, and the amazing Julie Valin who formatted, proofed, designed and turned it into a real book.

by leaving home and tumbling

sail upwards into the blue.

There are worse things than a rabbit hole.

He’ll have to lose himself

to save his soul.