“Justice is what love sounds like when it speaks in public.”

Posted on December 31, 2018 by Christine Irving

We just finished binging on True Detective, season one, with Matthew McConaughey and Woody Harrelson.  The story line is flawed, but the character development, acting and directing is superb.  McConaughey’s character, Rustin Cohle is an existential nihilist.  It fascinated me, not only because one rarely hears this philosophy 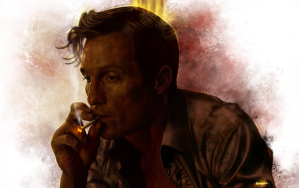 espoused on TV by a protagonist, but also because he pretty much describes my own take on the human condition.  Except, unlike Cohle, who describes himself as a pessimist, I find the whole of nature so miraculous; so utterly, ineffably, paradoxically, rationally random that I succumb in awe to spiritual wonder.  I suppose that’s why I’m an optimist.

It interests me mightily that Rust and I, while inhabiting the same philosophical ground, hold such different perspectives.  Yet, we share one overriding characteristic – a compelling drive to understand whatever’s going on around us, to us, with us.  It results in a highly-honed sense of justice.  Which brings us to the above quote by Michael Eric Dyson that synchronisticaly appeared on my virtual doorstep just as the last credit rolled.

I agree with Rustin Cohle that the human condition is not a pretty one.  I cannot escape the conclusion that I, along with everyone else, am capable of enacting our entire panoply of good and evil.  To my mind, the only choice left after mapping our situation is to embrace (love) or reject (despair) ourselves.  I think Michael Dyson’s sentence could substitute ‘despair’ for ‘love’ and still be true.  But, love allows us to transcend the despair engendered by full knowledge of human inequity and cruelty.

The great spiritual teachers tell us that to know God, one must first know oneself.  To know oneself equates to accepting the entire range of human nature for what it is.  The spectrum of good and evil is only a part of it.  Our human nature includes every little quark of creation in this universe, from the stardust we are made of to our intimate genetic connection with all the beings of this world.  Thus we come full circle back to the ineffable something some beings call ‘God’.

The thing about insisting on understanding is that one tends to think and act more fairly because understanding includes motive.  Notice that the US justice system may take both circumstance and intent into account.  Some other systems can’t.   Consider “an eye for an eye” or “one strike, you’re out.”

The justice system that I follow boils down to “what comes around goes around.”  It accords well with that of ancient Egyptians who believed in an aspect of God called Ma’at.  She represents the laws of the universe i.e. harmony and balance.  When

people die they stand before her to be judged for how well they maintained balance with themselves, their families and their community.  Setting the heart on her scales, she weighs it against a feather.  If the scale remains stable or the heart proves lighter, the soul moves on to rebirth.   If one’s heart outweighs the feather, the soul is thrown to a crocodile to be utterly devoured .

The Beatles were right, “All you need is love.”  Love enlightens the heart.  I experience it as the choice to transcend despair by embracing all that we are, which means loving it all – plants , animals, humans, rocks and stars – every element.

The Christian mystic, Hildegard of Bingen compared her humanity to “a feather which has no weight from its own strength and lets itself be carried on the wind.”  A feather is to a wing as wing is to bird, is to sky, is to cosmos, is to universe and what is our universe but an enormous balanced wheel of being?

If justice equals balance, than may we listen to love, enlighten our hearts and be carried aloft on the winds of change.

1 Response to “Justice is what love sounds like when it speaks in public.”